“Some people say that eating a plant-based diet is extreme. But millions of people this year will have their bodies cut open, and a vein from their leg sewed onto their heart….Some might also say that’s extreme.” (Forks Over Knives, description of coronary bypass surgery vs. plant-based diet) 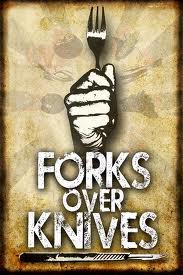 I watch a lot of food documentaries. I mean A LOT! Some are better than others, but in general I feel like there is so much to learn–about our food system and about how food shapes health. Recently, I watched a documentary that was unlike any that I had seen. It’s called Forks Over Knives and what sets it apart from the rest is its heavy reliance on science to back up the many claims in the film.

The take home of the documentary–eat whole foods and a plant-based diet–is not all that novel. However, this film support that message in super interesting ways.

All in all, I absolutely loved this film and would recommend it to anyone who wants to live a healthier life. Sometimes the cold hard facts are enough to light a fire under your bum to make the changes you’ve wanted to make for oh, so long. This film provides the information needed to make those changes and the motivation to make those changes. One of the individuals featured in the film asserts that we all have the power to change our health destinies. We are not helpless victims, we must take more responsibility and stop being so dependent on doctors. I was really encouraged by this. And I hope you are too! 😀

P.S. I’ll be reviewing two more films for Spring Cleaning month, but my next post will be a recipe … and a giveaway! 🙂