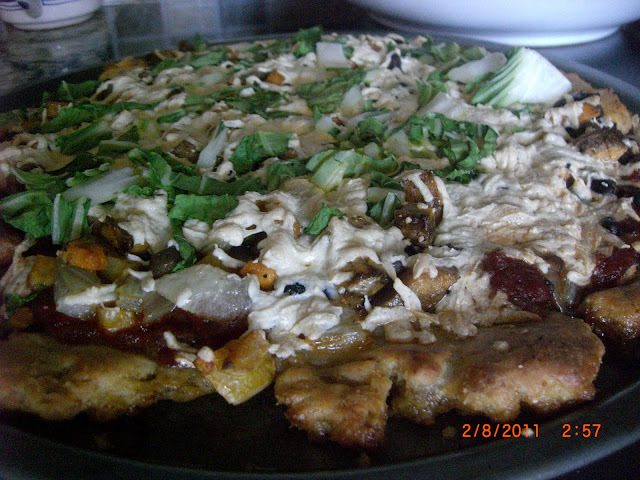 SEEDS has been the praxis by which so many of my food-adventures and foodie-friendships have begun. So, it was only natural that a Triangle Love post would feature folks I have met through this inspiring organization. While I am still waiting for a SEEDS youth coordinator to write a piece on “food deserts,” with some of the youth, (ahem, hint, hint), this month’s Triangle Love post features Chris and Marisa—two fellow SEEDS volunteers.

I met Chris when he arrived at SEEDS one Saturday just in time for the lunch the youth prepare each week after working in the garden and selling produce at the Durham Farmers Market. One of the youth hipped me to Chris’ ploy (that he, of course, denies wholeheartedly)—“he always brings his compost to the garden right around the time we are going to eat.”

“Convenient,” I thought. But, what I should have thought was, “Cool!” Because that’s what he, and his girlfriend Marisa are—just crazy cool. Chris was hilarious and liked my food (which always gets you cool points in my book) and the next we met up at SEEDS, he was there with Marisa, who—lucky for me—was off from the hospital that day. I instantly loved Marisa. Maybe it was because I found out she was from New England like me. Perhaps it was her incredibly positive energy. Or maybe it was because she had mentioned that she loved food blogs and would totally start one if she had the time. I offered them the chance to do a guest post on Como Water and the rest is history.

Marisa and Chris, who also have a community garden plot at SEEDS, are both vegan, which made it easy for them to contribute one of their great meals to the Como Water repertoire. Their pizza completely symbolizes cooking the way I think cooking should be done—improvisational, local, sustainable, veggie friendly, and, claro que si, delicioso! So, with that, meet Marisa and Chris (and prepare to laugh)!

I grew up with the good fortune of picking fresh berries and plump tomatoes from my back yard garden and popping them in my mouth, still warmed from the sun.

In high school I slowly realized that not everyone had the good fortune of growing up with fresh produce, never mind from their families own garden.  I grew to appreciate mine more.  Through high school, college and medical school I learned more and more about the healing and preventative benefits of good, fresh food.   Ultimately, as a physician, people’s health is my primary concern.

Chris and I met on the soccer field as I finished up school in Boston.  This shows the other equally important side of health–physical activity.  We immediately shared an interest in healthful, sustainable and delicious food.  I gradually ate less and less meat until recently eating none.  He adapted some of his favorite recipes to tolerate my intolerance to gluten (a protein found in wheat, barley and rye).  I believe these changes have contributed to more creativity, diversity and deliciousness in what we cook for ourselves and enjoy sharing with others.  His adaptations, spontaneity and ability to create delicious food keep it fun, as it should be.

My surgery residency brought us to Durham where I have held fast to my northern roots. Although it seems as many of the coolest New Englanders have migrated down here before us aka Tiffany.  Chris (who is amazing at using google and will give free lessons if asked nicely) discovered SEEDS and surprised me one day with a trip there and an introduction to the people and our new gardening plot.  SEEDS focus on sustainability and education immediately drew him in and he knew it would for me too.  The people that we have met there (in addition to the delicious Saturday meals for Chris) have kept us going back for more.

I am far from my childhood back yard garden down here in Durham, but close to so many people with similar values of focus on sustainable produce, enjoying the process and savoring the outcome.

Approached in the way, it is even possible to make something as simple as pizza, but missing what seems to be the most crucial ingredients of wheat, dairy and meat, and make it even better.

For me, the ethics, health, and consideration of the impacts of one’s diet, came much later on in life.  I was on a long distance bicycle trip in 2008, and met a vegan who was Californian (go figure).  Prior to this, I ate relatively well, but didn’t pay nearly as much attention to nutrition (the effects on me), or the resources required to produce food (the effects on everyone).   After doing some research, I realized a vegan diet was a no-brainer for me as it aligned with my values in so many ways.

After meeting Marisa, the gluten free curveball, as she describes, has added a slight level of complexity that has been fun to cater to.  Most healthy foods are sans gluten anyhow, and there is some significant research that says maybe gluten protein isn’t a wonderful food for all of us, regardless of being allergic or not, so it is likely that our relationship is having a positive impact on my diet as well.  Additionally, she is super knowledgeable about foods from all over the world.   Combine this with our subscription to a local farm share, and virtually every meal at home is an oft delicious, learning experience.

We eat everyday, sometimes multiples times, and with differing schedules (primarily the craziness of being an intern resident), we try to do it together as much as possible.  Stay with me.

Without further adieu… the actual recipe:

In order to guarantee a delicious treat from this meal, you have to adhere religiously to all of the following directions

We prefer our recipes to be simple and adaptable.  Admittedly, this pizza recipe asks for quite a few ingredients some of which you may not have at home (unless you’re Tiffany), so use it as a guide.  This is our cooking style.  We make whatever we have around (often with a generous helping of olive oil) and hope it tastes wonderful.  If nothing else, it’s proof (at least it WAS proof for us for one night) that sweet potatoes and beans can test amazing together on a gluten free, vegan pizza.

The dough makes two crusts, so you might as well make two pizzas.

Timing is everything (like coincidentally showing up at SEEDS around noon on Saturdays).  It’s helpful to save time with this recipe to do some of the tasks concurrently.  To this end, a partner would be nice, but of course, not necessary.

The crust is a two step process, with waiting, so start there.

Follow the directions on the back of the package.  Once you’re done you need to let the dough rise for 20 minutes before you bake it without the ingredients to crustify it.

Next is the sweet potatoes.  Chop them up. The smaller the better (for cooking time purposes).  LATHER them in olive oil, and garlic, put them in a big bowl, and then put it in the oven at the heat dictated by the pizza crust.  You’ll take them out later once the crust is done with its first round or if they get soft enough prior.  Remember they’ll continue to cook with the pizza a bit, so they don’t have to be super soft.

Next, cook the beans.  We use a pressure cooker, which saves a lot of time, and energy.  Hooray! 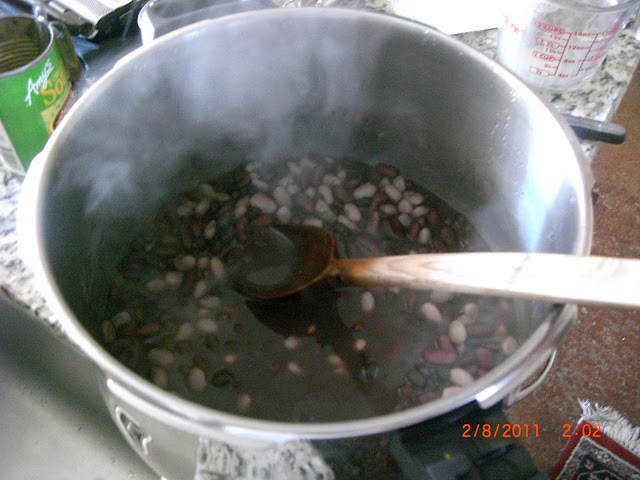 Next, if the dough has risen for 20 minutes, grease up a couple cookie sheets, or pizza stones, or whatever you can put a pizza on.  The dough can be hard to spread, so make sure to keep adding water to your hands.  It’ll be malleable like clay, and all of the water will bake out in the oven, so don’t be stingy. 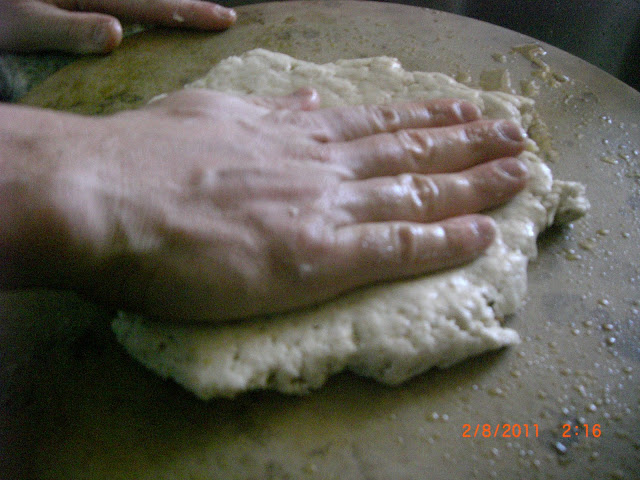 While the beans, potatoes, and crust are going, sautee whatever veggies you have in enough garlic to take out one of those damn adorable tweens from twilight with a single breath (please). 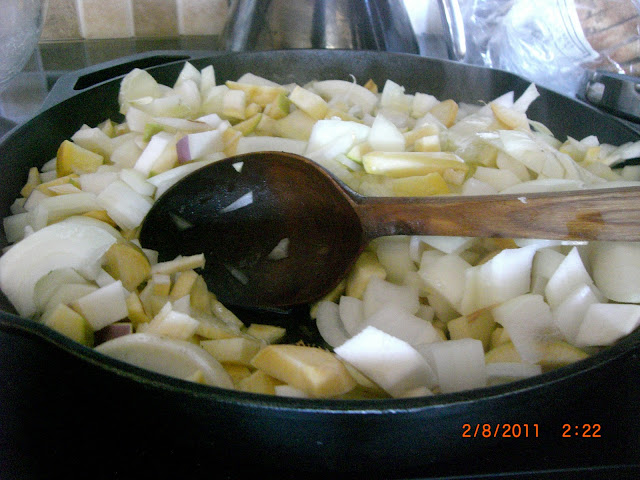 Hopefully, if you’ve timed everything right, which of course you didn’t, take out the crusts, add the sauce and all the toppings, including the beans and sweet potatoes, and top with delicious and decadent, dairy-free, daiya cheese. 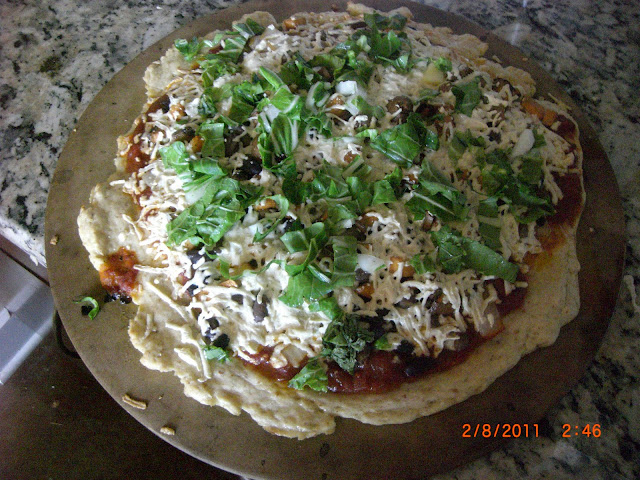 Bake pizzas, and a few minutes before they’re ready add, if you have them, some greens on top.

Viola!  Send praise (and money) to Chris and Marisa for this ingenious (not really) pizza concoction.  Don’t forget to follow all of the rules!

In reality, we made, and often do, way too many toppings for the pizza real estate we were working with.  We ended up eating the mixture of toppings on its own for days afterwards, and it was delicious.

P.S. Another favorite trick of mine with pizzas is to use avocado as a base instead of tomato sauce.  Try it, you’ll never go back.

P.P.P.S. All the pics (those that didn’t make the cut)

View all posts by: ChrisRusso